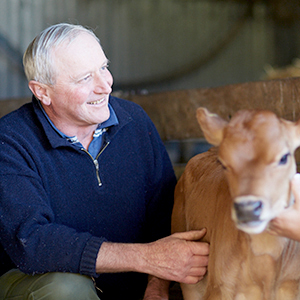 At 12ha in Normanby (near Hawera), Cliff Shearer has one of New Zealand’s smaller dairy farms.

But his 32 pedigree Jersey cows set New Zealand and international records in 2011/12 with a herd test average of 670kg MS/cow at 1707kg MS/ha. As well as good feeding, Cliff puts line breeding, all back to an exceptionally good cow purchased in 1980, as being the keys to his success.

“That 670kg was an all time record for a New Zealand Jersey herd, the fourth highest for all breeds, and the highest producing Jersey herd in the Southern Hemisphere,” says Cliff – a result achieved on a sole remaining dairy farm surrounded by a sea of lifestyle blocks, milking in a walk-through shed.

“My goal is production per cow. My target is 750kg MS each, and Ingham feeds are the basis of how I’m going to get there,” says Cliff.

“I feed nine kilos of TopCow custom ration pellets a day, which has all the goodies such as magnesium oxide and Rumensin® in it. That saves extra work such as drenching, and more than pays for itself.”

Ingham animal nutritionist Pip Gale also helped create a custom pellet mix for Cliff, “and he’s onboard with my goals for big production levels per cow.”

His Ingham meal feeding is equivalent to about 40% of an intended 22-24kg daily intake total of dry matter (including pasture).

“The TopCow is the top end, the champagne and caviar of the diet, where my cows get the true value of the feed, the good bits,” he says.

“I’m quite a proponent of high input feeding. It is the most efficient way to go and I make more money per cow by doing it.”

His average weight 450kg cows are producing about one-and-a-half times their bodyweight in milk solids production - a figure well above the New Zealand norm.

“There are Jersey herds in the United States doing 1200kg a cow,” he says. “If they can do it there, there’s no reason we can’t here. It is a question of getting the feeding right, and Ingham are a big part in fine tuning that side of things.”